How to crochet: Triple-treble stitch 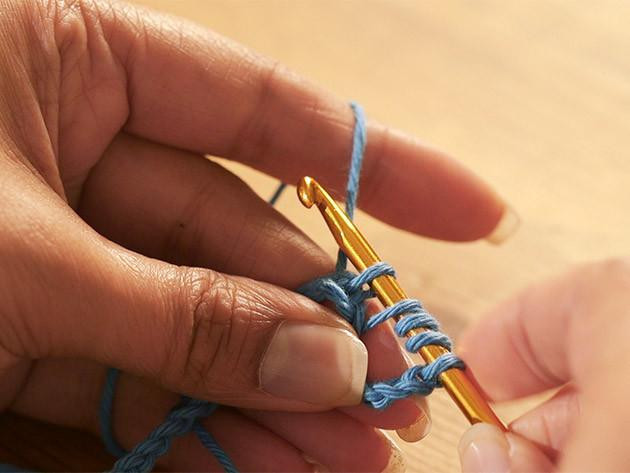 By Freddie Patmore 6 years ago

In our tutorial video, The Knitting Network's Freddie Patmore will show you how to work a triple-treble stitch in crochet before demonstrating how to use it in an increase and decrease.

Working into a chain

Triple trebles are an extremely tall stitch to work along a straight row. So when working into a chain, you will need to miss the first five chains and work into the sixth one.

Begin by getting three loops of yarn around your hook, find the sixth chain and insert your hook through it from front to back under the top two loops of this chain.

Get another loop of yarn and pull it through the chain to the front to create five loops of yarn on your hook. To finish the stitch, you will need to work into each of these five, two at a time with a new loop of yarn for each pass.

You'll know that your triple-treble stitch has been completed if you just have one loop left on your hook.

If working an all-over triple-treble fabric in rows, you need to begin your row by working five chains. This will give you the height of the stitch before you begin.

To work your first stitch, don't go into the very first loop at the base of the chain. Instead, work into the next one along.

Start by getting three loops of yarn around your hook and angle your hook downwards, poking through the top of the next stitch. Going away from you, get one loop of yarn and bring it through to the front to make five loops on your hook.

That completes your triple-treble stitch.

To work a single triple-treble decrease across two existing stitches, start by beginning a triple-treble as normal with your three loops of yarn around your hook into the designated stitch. Bring another loop of yarn around the the front and then work until you only have two loops remaining on your hook.

Stop at this stage and begin as if you're working a brand new triple-treble and work to the final stage of this second triple-treble.

You should now see that two part triple-trebles have been worked. Get another loop of yarn and bring it through the three remaining loops on your hook to bring these two partly worked triple-trebles together as one stitch.

In order to increase in an all-over triple-treble fabric, you simply need to work more than one triple-treble into the stitch on the row below.

Work your first one as normal into the designated stitch, finishing off in the same way as before.

Simply follow the column of stitching down to the stitch where you've previously worked and add one or more additional stitches into the same space.

By doing this you are adding stitches at the top of your work where only one existed before.

Learn How To Crochet with our complete guide.

How to crochet: A flower