How to crochet: Half-treble stitch 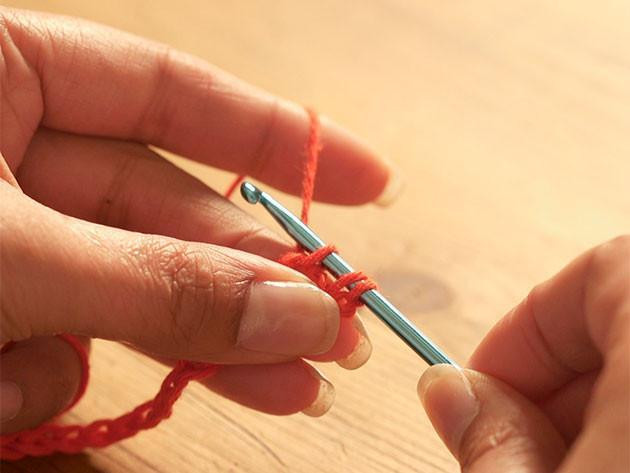 By Freddie Patmore 6 years ago

Half-treble stitch falls between double and treble in terms of size.

It's known as half-treble crochet in the US and is one of the taller crocheted stitches. When working an all-over fabric in half-trebles, your fabric is richly textured and dense. For the amount of fabric produced, the yarn is used up very quickly.

Half-trebles are worked with an initial yarn round hook, which requires additional steps (wraps) to complete the stitch. Half-trebles are slightly shorter than treble stitches but taller than double-crochet stitches.

The Knitting Network's Freddie Patmore takes you through the stitch from start to finish in our video guide below.

Working into a chain

Yarn round hook before inserting the hook under two strands of the third chain from hook, unless otherwise specified in your pattern.

Yarn round hook and pull the yarn through to make three loops on the hook.

Yarn round hook again and pull the yarn through all three loops on hook. This completes your stitch.

When working a row of half-trebles, you must work two chain stitches in order to achieve the height of a half-treble so that you may then work downwards into the top of your work. To achieve a straight edge, you usually miss the first stitch at the base of your chains and crochet into the next stitch along before continuing into every further stitch along the row.

Continue until you reach the very last stitch of the row, which, if your previous row is also half-trebles, will be formed of two chains. Work one treble into the 2nd of these two chains to finish the row.

One way to decrease in treble crochet, is to work a half-treble two together or ‘htr2tog’.

You should now have five loops on your hook. Yarn over hook once more and bring yarn through all five loops on hook. You have now decreased one stitch.

In order to increase in an all-over half-treble crochet fabric, simply work two half-trebles into the required stitch. Work a half-treble as normal into your next stitch like this and then work another into the same stitch.

'You can now see on my piece of crochet that I’ve worked an extra stitch into a single stitch on the previous below, thus creating an extra stitch along this row,' says Freddie.

Learn How To Crochet with our complete guide.

How to crochet: Treble stitch