Introducing the gorgeous Peaches & Cream Blanket, a vintage-inspired knit that uses one of our favourite colour palettes!

Our Peaches & Cream Blanket is a wonderful knitted sample blanket that uses a mix of four different knitted stitches, each beautiful in their own right and surrounded by a simple garter stitch border. We came up with the concept of Peaches and Cream, with the idea of having a vintage inspired blanket and colours to suit the theme. We had various stitches in mind and had some beautiful samples to choose from - our favourites were the lace-style stitches and ones creating a pretty wave effect. Designer, Nicola Valiji has brought our vision to life beautifully and we really hope you like it too! 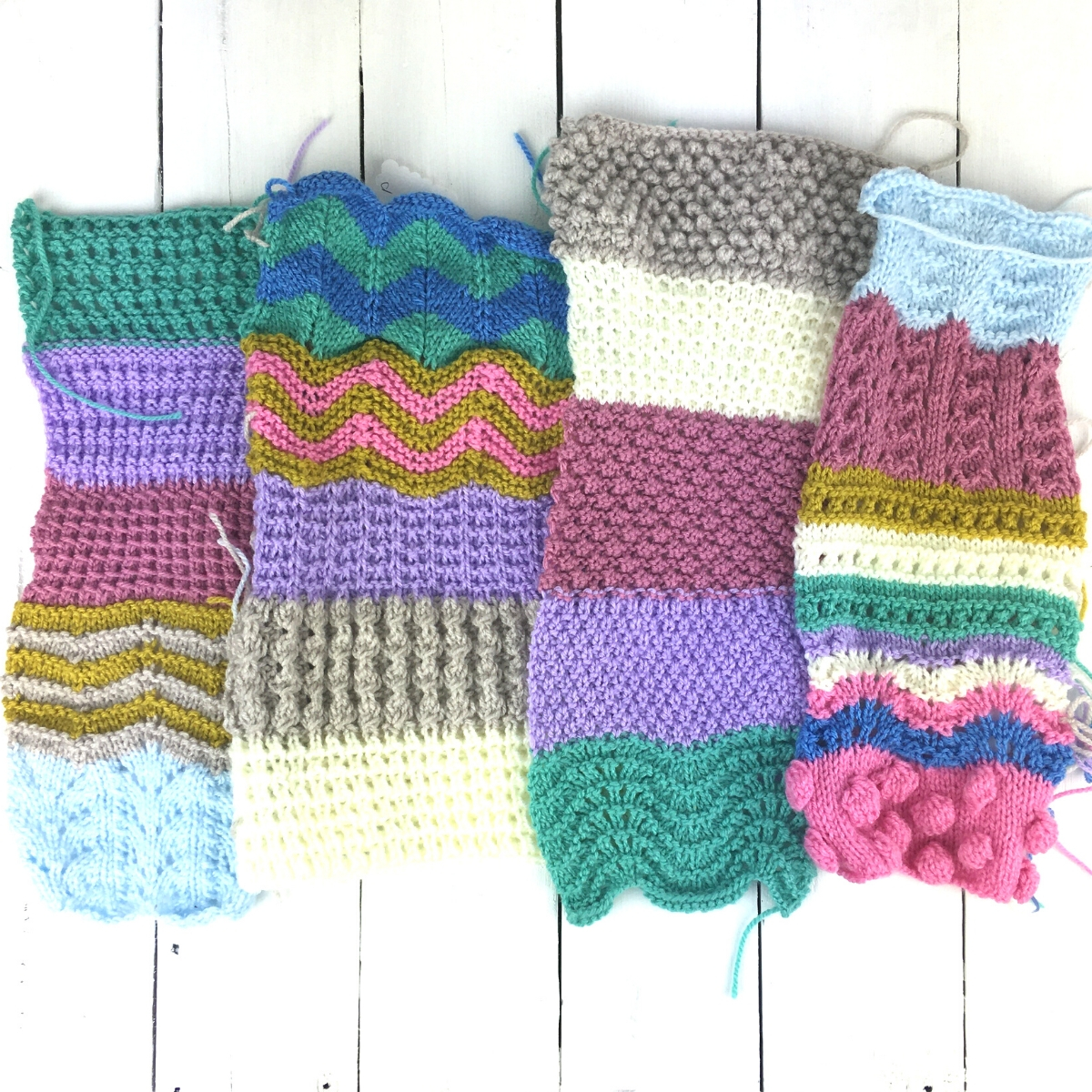 The overall lace design gives the blanket a vintage feel and the ‘peaches and cream’ colour scheme conjures up memories of this old-fashioned comfort food, taking us back to our childhood. The warm colours, together with those nostalgic childhood memories evoked by this delicious dessert, makes for a lovely themed and fun design. 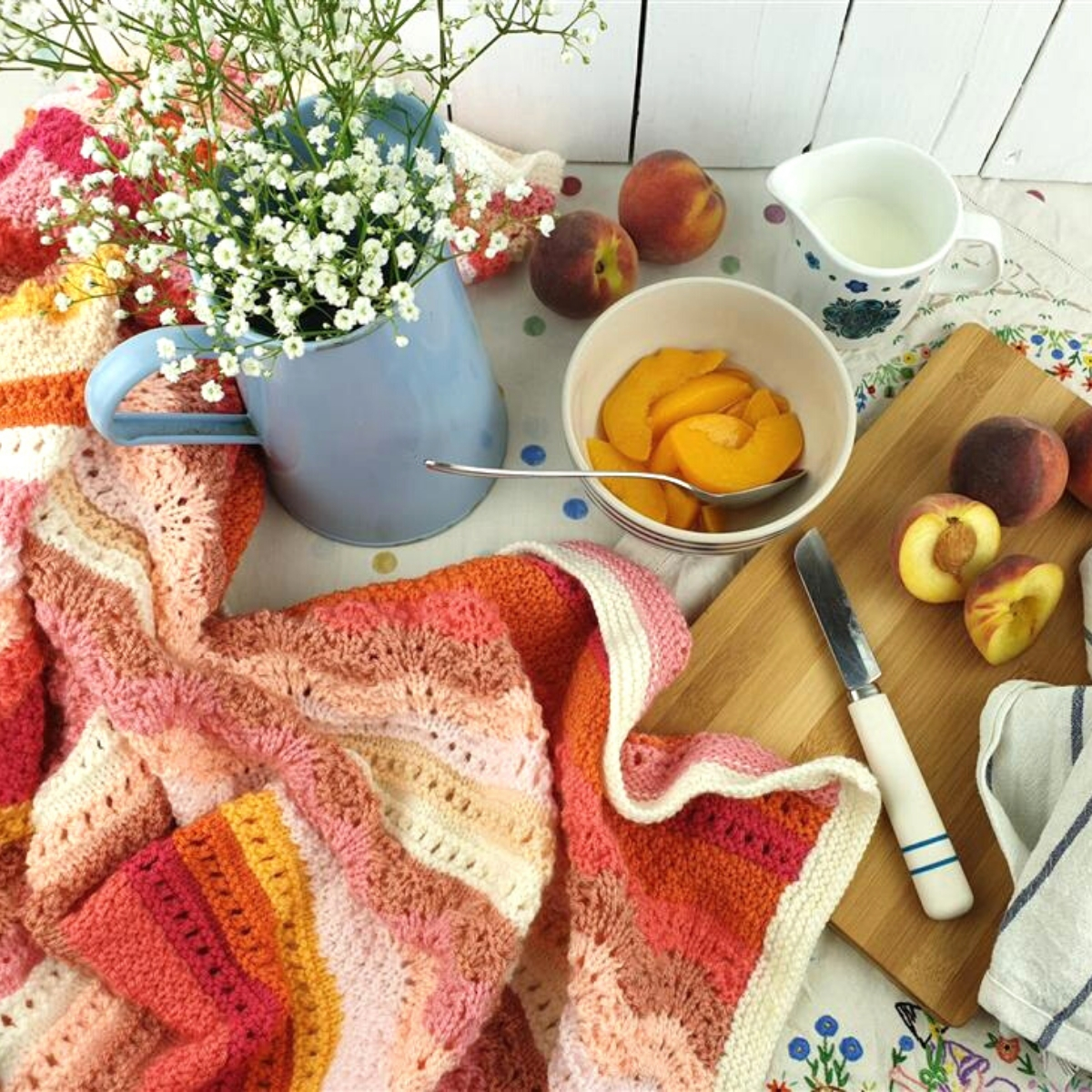 The combination of knitted stitches that make up this pretty blanket creates a wonderfully touchable texture. Together with the ten different peachy shades, this blanket is an engaging and interesting project that can be picked up and worked on in between busy days. So, take a few moments for yourself, sit back in a comfy chair, enjoy the pattern as it reveals itself and have fun indulging in some wonderful nostalgia! 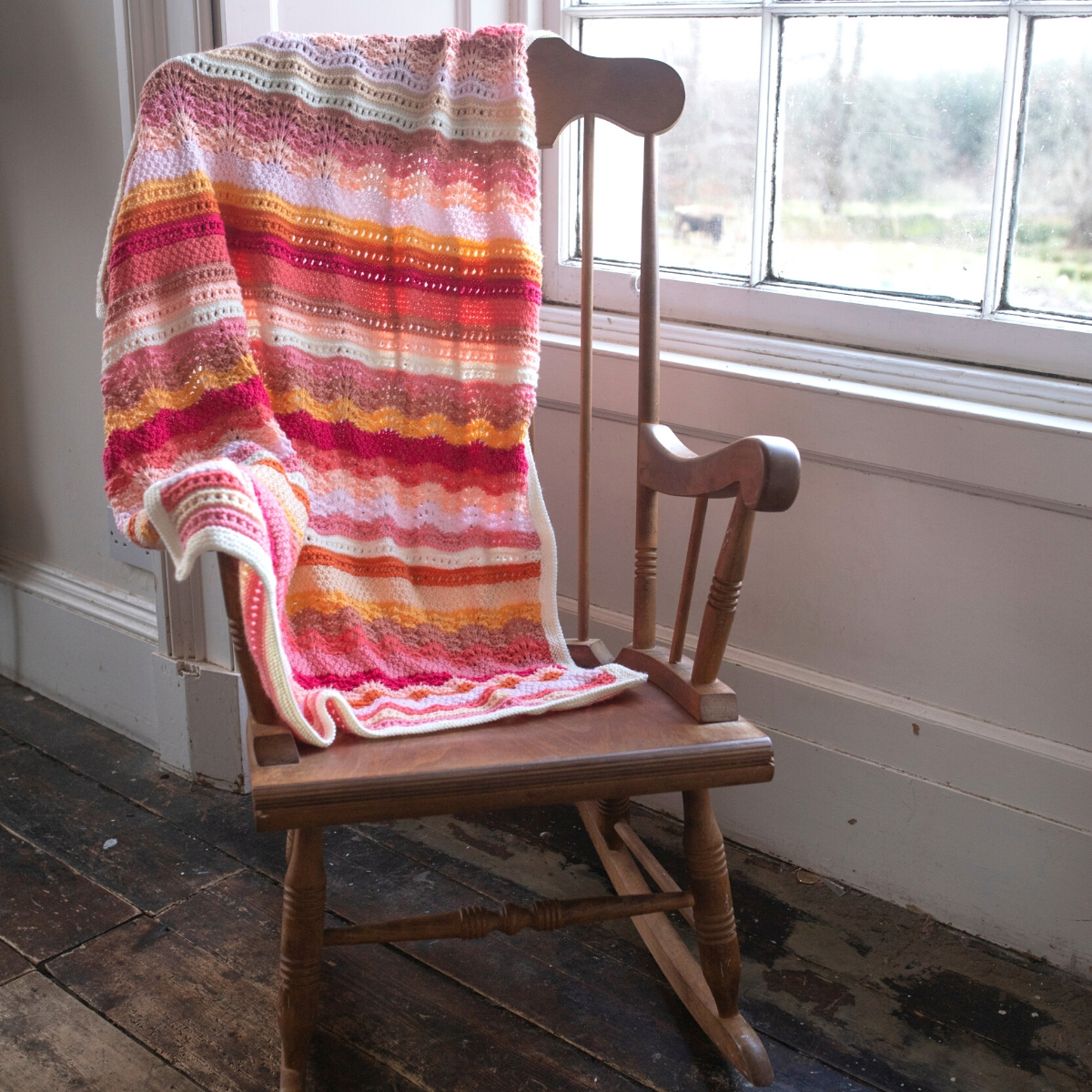 We’ve used Stylecraft Special DK yarn for this blanket, which is soft and warm and can be easily washed in the washing machine for practicality. The finished blanket measures a generous 95 x 130cm/37.5 x 51" (approx.) 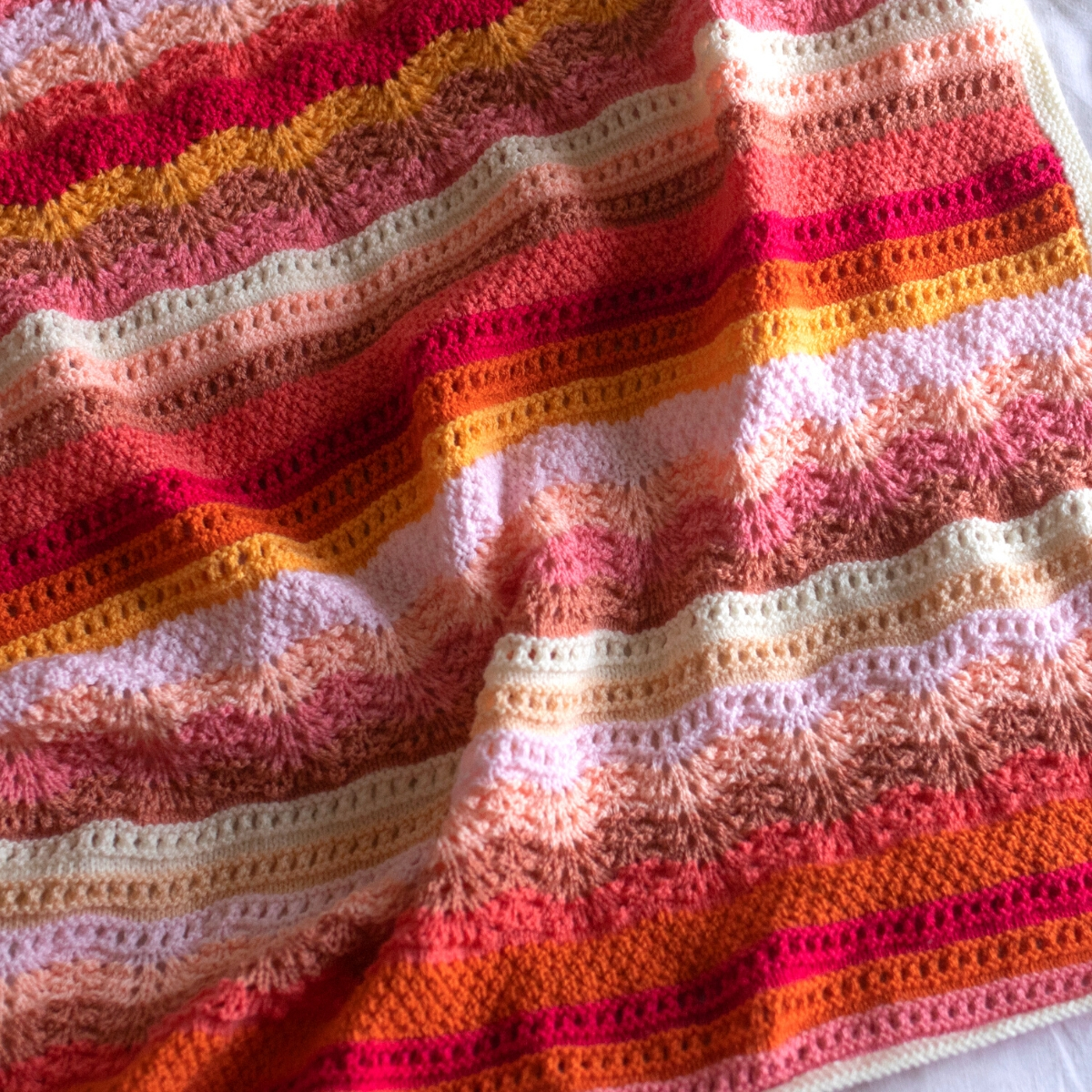 Our Peaches & Cream Blanket Colour Pack contains all 10 balls of Stylecraft Special DK yarn you need to complete the blanket, plus a printed copy of the pattern and an ‘I Love Knitting’ sticker. You can buy yours here for just £21.99 >> 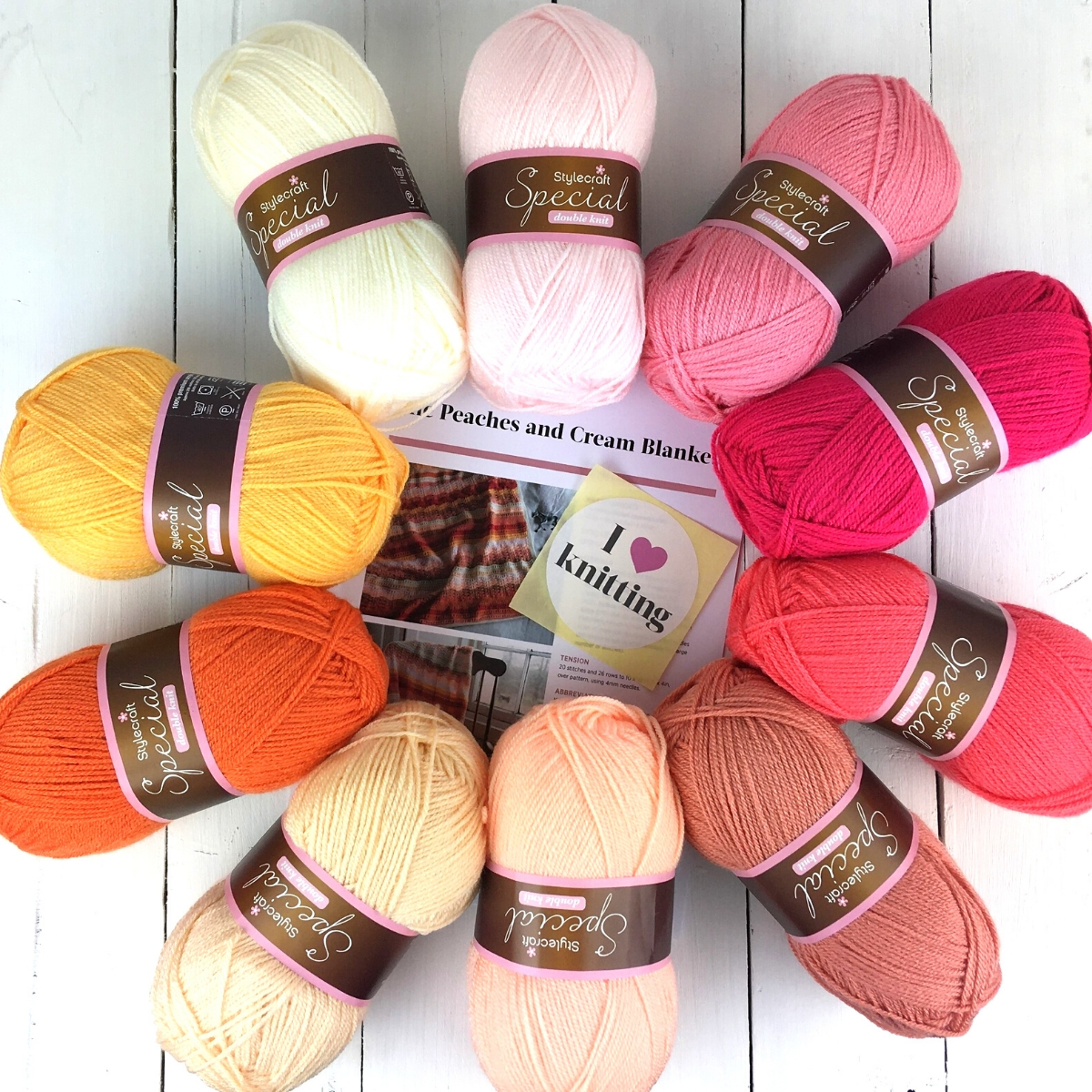 Happy knitting! Don't forget to share you progress with us on social media using the hashtag #peachesandcreamblanket - we can't wait to see how you get on!

Australia day is marked every year on the 26th of January. It's a day to reflect on its history and to celebrate the nation, its achievements and most of all, its people.

We’ve all been shocked by the news about the awful bush fires, which have had devastating effects. More than 10 million hectares have been burnt, and this number continues to climb. That’s the equivalent of 40% of the entire UK. Lives, homes, and an estimated 1.25 billion animals have been affected, including 30% of the entire koala population in mid-north coast of New South Wales. For more information you can visit WWF’s website here.

In aid of this crisis and to mark today being Australia Day, we’re selling this adorable PDF - Print at Home Kangaroo knitting pattern for £1 and all proceeds taken up until the end of January will be donated to Wildlife Victoria's Victorian Bushfire Appeal (digital PDF pattern only). Donations to the Victorian Bushfire Appeal will be distributed to wildlife shelters and carers to help rebuild enclosures and equipment that they have lost in the fires so that they can continue their lifesaving work, and support those that are struggling to cope with the enormous number of animals that will need care in the coming weeks and months. You can read more about the charity here. 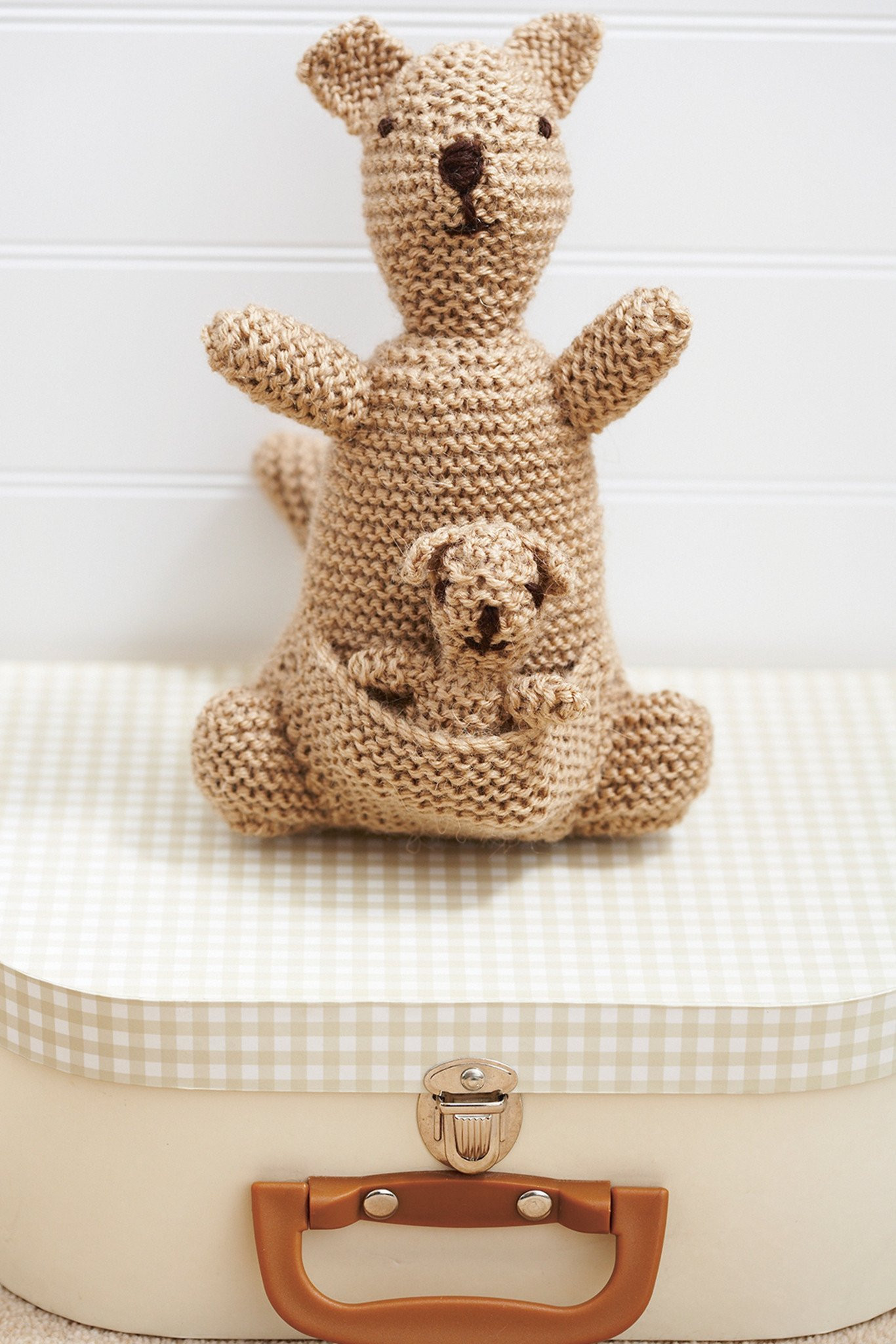 We’d love to see your knitted Kangaroos and Joeys and you can share your WIPS and finished projects over on our Facebook page. By adding the tag @wildlifevictoria you’ll also help to spread the word of the important work that Wildlife Victoria do.

Burns Night is celebrated every year and marks the anniversary of Robert Burns’ birthday on the 25th January. The celebrations combine haggis and other traditional Scottish food, whisky, poetry, songs and lots of fun and laughter!

Robert Burns, also known fondly as Rabbie Burns, is widely regarded as the national poet of Scotland and is known worldwide. Burns also collected folk songs from across Scotland, often revising or adapting them.

The first Burns supper was held in July 1801. It was organised by nine of Burns’ close friends who got together to mark the fifth anniversary of their friend’s death. The night included a traditional meal of haggis, performances of Burns’ work and a speech in honour of their friend. The night was such a success they decided to hold it again, this time in honour of Rabbie’s birthday, which is now celebrated to this day throughout the world, celebrating Robert Burns’ life and work.

Coincidentally, Robert Burns’ arguably most famous poem and song, "Auld Lang Syne", is sung on New Year’s Eve, and this year he shares his celebrations with the Chinese New Year. To celebrate both of these wonderful events, we’ve found a rather lovely poem by Robert Burns’ about a wee mouse! Which we thought was rather fitting considering this year is the Chinese year of the rat (not quite a mouse we know, but a close relative and it’s a lovely poem!).

You can read more about the Chinese New Year over on our blog here, where you can also find two FREE mouse patterns!

On Turning Her Up in Her Nest with the Plough,

O, what a panic’s in thy breastie!

I wad be laith to rin an’ chase thee,

An’ justifies that ill opinion

At me, thy poor, earth-born companion

I doubt na, whyles, but thou may thieve;

What then? poor beastie, thou maun live!

I’ll get a blessin wi’ the lave,

Thy wee-bit housie, too, in ruin!

Its silly wa’s the win’s are strewin!

Thou saw the fields laid bare an’ waste,

An’ cozie here, beneath the blast,

Thou thought to dwell,

Till crash! the cruel coulter past

Out thro’ thy cell.

Now thou’s turned out, for a’ thy trouble,

But house or hald,

To thole the Winter’s sleety dribble,

But Mousie, thou art no thy lane,

In proving foresight may be vain:

An’ lea’e us nought but grief an’ pain,

Still thou are blest, compared wi’ me!

The present only toucheth thee:

But Och! I backward cast my e’e,

An’ forward, tho’ I cannot see,

I guess an’ fear!

January 25th 2020 marks the official start of the Chinese New Year, which ends on February 4th. The traditions surrounding the Chinese New Year (or Spring Festival) date back thousands of years and include putting up red decorations, lighting firecrackers, taboos like no cleaning or sweeping and myths telling the story of a monster named Nián.

Every year in China is represented by a different zodiac animal, there are 12 Chinese zodiac animals in total. Zodiac signs play an integral part in Chinese culture and can be used to determine the fortune of the year ahead, marriage compatibility, career choices, best times to have a baby, and many more. 2020 is the year of the rat in the Chinese Zodiac, which is the first of all zodiac animals.

The Rat represents the beginning of a new day and in Chinese culture rats were also seen as a sign of wealth and surplus.

In the spirit of celebration, we’re giving away 2 of our Woman’s Weekly patterns for FREE, rodent themed of course! We don’t have the fortune of having any rat patterns, but we feel a mouse, being a close relative, would make a good substitute. Plus these two patterns are just so sweet! 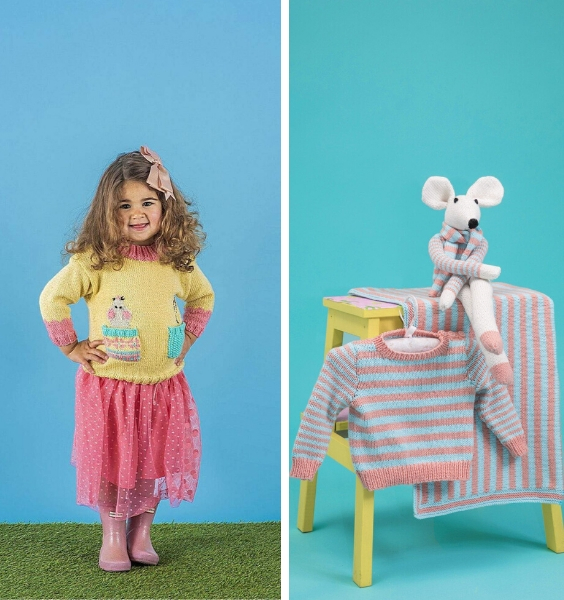